Regardless of any legal or moral standards placed upon us, 95% of all music downloads by the public are done by illegal manners. File-sharing has ensured that, in effect, music is free. So when an artist or band take the self-conscious decision to make the fruits of their musical efforts available without charge, I commend them on their pragmatism. Of course, the physical or online digital release of an album or EP will normally generate a little revenue for the artist. On the other hand, releasing the material free of charge will gain extra exposure for the material and easier sleep for those who would have otherwise stolen it. Furthermore, it often opens the gateway towards a greater live audience.
Leicester up-starts Minnaars are one such group of talented musicians who've chosen this route. Although their decision was influenced by wranglings with a record label, they've embraced the digital age with an approach as forward-thinking as their tunes.
To place a genre upon Minnaars would merely serve to pigeon-hole their sound. This EP is a collection of four tracks which dabble in math and indie and pop, yet constantly maintain a rhythm which ensures there's a dancey aspect to each song, a glory to behold live, I'm sure.
Minnaars originally warranted my attention due to the involvement of one of my heros, Tom Woodhead of !Forward ,Russia! vocal fame, as producer. And on listening to the EP, the yelping Leeds man has yet to disappoint me with any of his musical output, at any level.
Essay Essay Essay is a track which gives a graceful nod to American experimental-types, Minus the Bear. Seemingly, Tom's time in the studio with Menus El Oso and Life Processes producer, Matt Bayles, has inspired Woodhead's slick production, with plenty of guitars soaked in delay and reverb and synthesizers used to subtle effect. In fact, it almost sounds like Woodhead is on vocals when Adam first steps up to the microphone, but soon stamps on the track his own, unique voice.

Experimentation is rarely shied from by the band. To Jackals is a track which sets the band apart as an indie guitar group who can match artistic credibility with tuneful purposeness. At one stage in the track, you might get the impression that it will wander off on a tangent of sweeping instrumentals and ethereal vocals, before crunching guitars bring the song back to earth. The fluctuation is maintained with ease throughout the rest of the song.
Busy Hands begins as the EP's danciest track. "I've been falling into bits, been like this since the blitz" goes Adam Pickering's mantra, as he capably oversees the synths in the process. The bouncy bass transmits a highly-contagious feet-jerking syndrome, while guitars loop and intertwine like the threads of a most dynamic pattern.
The EP is fittingly closed by Your Heart My Embassy. Again, progression is at a premium. It begins as the EP's most straightforward pop song, packed with some killer hooks and catchy glitches, but ends as a sprawling piece of daring experimentation which, like most other things in the EP, works to considerable effect.
The term landfill indie has been coined for so many guitar bands who dabble in dance and pop. What sets Minnaars apart is that they have the tunes and the bravery. Comparisons with Foals, due to a fixation with the bottom 12 frets, I suspect, are wide of the mark. The overly-focused sound of the Oxford indie-math band's debut Antidotes pales in contrast this. This EP focuses on innovative music which makes you dance, revere and ponder in equal measures.
8.5/10 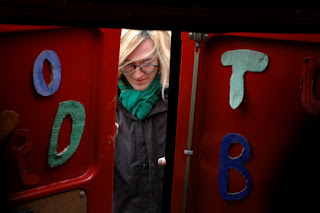 Myspace browsing. Isn't it awesome when you discover a band that's really special, just because they're friends of the friend of another band that you like? Much of the time, when I'm feeling very lazy, I give a quick listen to the band's most played track in their music player. Tubelord's was I Am Azerrad. Now, many will be immediately put off by Jo's chirpish and tender voice, which sound like Simon Neil of Biffy Clyro after spending a week in an helium chamber. But the song was infectious. It was jerky, melodic and meandered off in many different angles, sometimes down dark alleyways ("I'll kill today, I'll kill you as a rat") and others atop vast mountains ("Answers always lying in the paths, I'll see you at the bottom of a star") .
Mathy guitars, bouncy bass and a drummer who pounds at the right times and caresses his cymbal when it most needs some tlc. Oh, and the vocals, never forget the vocals, they're unforgettable. Equally as unforgettable as the nonsensical and smashingly fun lyrics, that go like "I was young when I was ten, and it was unforgivable" and "Another left hand with nothing on my shoulder, nothing but expectations" and "We're bigger than Memphis, you only exist when I want you to." Listening to Tubelord is the aural equivalent of riding a sherbert-powered rocket to the moon.
An album is in the can. Tour dates are due to be announced for May-5 dates with Johnny Foreigner, who are just out of studio with Alex 'Relationship of Command' Newport- so I'm guessing it'll be the soundtrack to my summer.

Download: Tubelord- Half Man Half Amazing
Listen: http://www.myspace.com/tubelord
Posted by Eoin at 5:59 PM No comments:

The Leeds music scene is a little bit special. In the past, it's provided me with two of my favourite bands in This Et Al and ¡Forward, Russia!. The transient link between the beginning of my exploration of the Leeds music scene, and my most recent discoveries may well be mapped out in relation to the Leeds-based indie label, Dance to the Radio. This Et Al and ¡F,R!'s split vinyl marked the birth of the label and it's most recent release, Grammatics self-titled debut, marks the label's proudest moment. Such an innovative and awe-inspiring piece of work would be cherished by the least modest of labels.
Fittingly, Grammatics opens with Shadow Committe, which was their debut single, released back in 2007. James Kenosha's productional rejuvenation of the track and some of the instrumental re-workings ensure it's impression remains in tact, after 2 years. The first riff following the instrumental opening sequence, is punchy yet restrained and clearly defines the band's ability to flawlessy couple Emilia Ergin's cello with the guitars. Shadow Committee furthermore serves to showcase more of the bands vast array of qualities in the chorus when the chorus' instrumental onslaught is staggeringly over-shadowed by the impeccable falsetto of Owen Brinley.
Brinley's vocals possess such a remarkable range and soft tone that they resemble those of a choirboy. But where a meek choirboy's mere utterances would be suffocated by the accompanying noise on a track such as Rosa Flood, Brinley's power and presence can never be ignored.
Like Brinley, the rest of these Grammatics can be as tender and mellow on certain occasions, as they can intense and dramatic on others, such is the diversity of their talents. The Vague Archive plods along merrily to begin with. After a mere 30 seconds, the song soars into a chorus, charged by thriving drums and bass.

Soaring melodies during choruses will often have the listener in giddy anticipation of their occurance. Murderer is perhaps the album standout and possesses an abundance of these most powerful melodies. The amazingly effective use of electronic features see guitars banished, they would serve little purpose in this track. The montage of aching synths and touching keys and the swirling effects of the chorus provide such a scope to the song that the axe could never dream of replicating. Murderer is such an affecting and touching song that the likes of Sigúr Rós and Jeniferever would hold it as their masterpiece, had they conceived it.
Far away from this surreal territory, however, begins Broken Wing. I often tend to dread the acoustic track on an album. Sometimes they're over-indulgent and often act as an anti-climax, shame on me for expecting such heinous crimes from Grammatics. The track begins with Brinley's voice displaying a staggering resemblence to Elliott Smith. The guitar isn't all that dissimilar to the strumming of the legendary songsmith either. However, after 2 minutes, the electricity is resumed, yet the emotion of the opening couple of minutes is retained.
To listen to Grammatics from start to finish, one must devote 61 minutes of their lives'-7 minutes less if you trim off the actual silence at the albums very end, interrupted by a couple of seconds of singing at the very end. And perhaps the album is elongated in places. Is there a purpose in every isolated period of noise that's void of vocals? The opening sequences of Shadow Committee are a signal of intent in their sonic sparsity, the heavily distorted guitars in the latter half of Relentless Fours provide a much needed whig-out following the preceeding minutes of the song which opened with tender electronic keys. On the other hand, the closing 1:20 of the 5 minutes of Murderer are random noises and incomprehendible speech on a phoneline. Filler for filler's sake, when it's not really needed.
I'm not overly-enamoured by the closer, Swan Song, either. It lacks the melody, progression and cohesion that are in such abundance throughout the rest of the album.
Perhaps this album may serve as the epitomy of the Leeds music scene; vibrant, unique and laced with genius. Actually, more fittingly, it's the gem in it's crown.
9/10
Download: Grammatics- Murderer
Listen: www.myspace.com/grammatics
Posted by Eoin at 4:00 PM No comments: